Coffee House rules – how football was shaped in Vienna's cafes

Sat surrounded by tourists in Budapest’s New York Café (pictured below), or Vienna’s  Café Central, it can be tempting to take a sip of your melange, pick up a spoonful of strudel, stare into the beautiful expanse between you and the ornate high ceilings, and transport yourself back 100 years to the heyday of the central European coffee house. 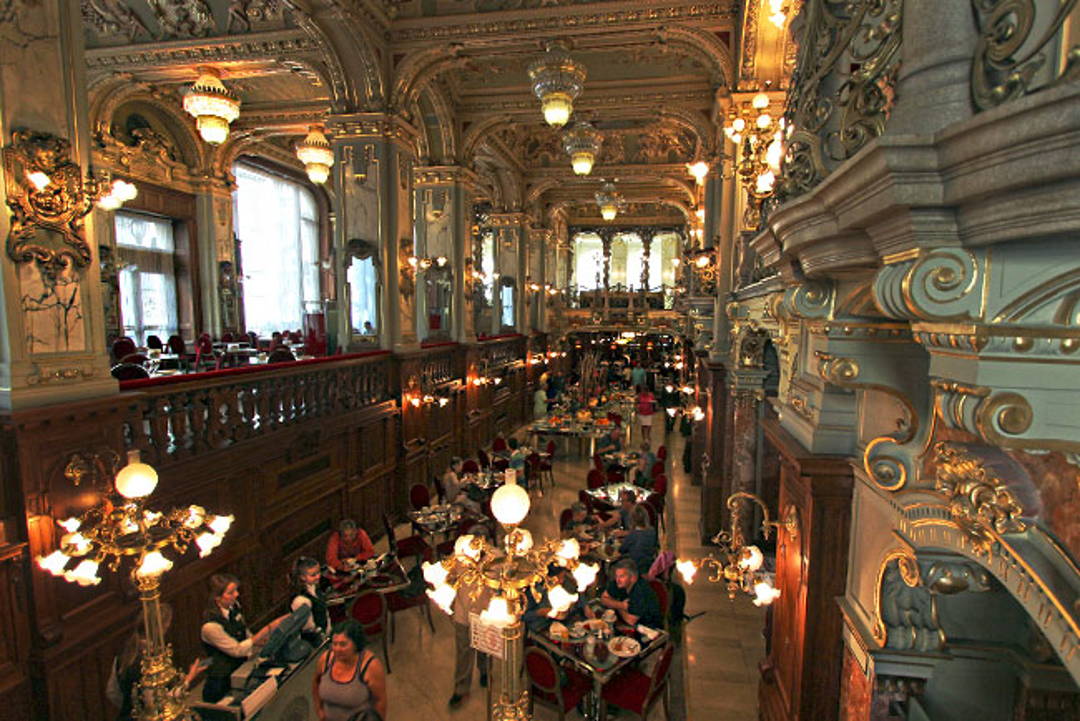 Suddenly the marble tables seem to be populated not by guide-book wielding visitors, but by an altogether different kind of clientele: a poet here, a philosopher there, a politician debating loudly with a gaggle of journalists in the corner, a company of actors sharing stories at the table behind you.

Like the British pub, the great coffee houses of the former Habsburg capitals were once an extension of a whole strata of society. A century before Twitter, the coffee house was abuzz with the latest news, hearing and debating the reaction to those events. It was the meeting point where political ideologies were hammered out, great works of literature inspired and many, many card games loudly and controversially decided. The Hungarian novelist and poet Dezső Kosztolányi gave life to the thrilling cacophony of the early twentieth century Budapest coffee house in one of his stories, quoted in Andras Torok’s wonderfully evocative Budapest: A Critical Guide.

“It felt so good to dip ourselves into that mist, in that hot pool, not thinking of anything for a while, paying attention to how it is bubbling and wabbling, and it was a great feeling to know that all these people who are paddling here, are slowly being relaxed, being tied to each other, all will soon be melted into one single, noisy soup...all were talking at the same time.”

Unlike the British pub, the atmosphere was distinctly bourgeois, as suggested by Kosztolányi’s description of the discussions going on around him.

“The topics were: whether one has free will or not, what shape is the best bacterium, how much are salaries in Britain, how far away Sirius can be, what Nietzsche meant by ‘eternal return’, is homosexuality rightful, is Anatole France Jewish? They wanted to get the gist of everything, in a quick and thorough manner.”

Unlikely though it may seem, amid the hubbub of the chattering classes there was room for a set of deep-thinking sportsmen, debating and reinterpreting football – its tactics, its structure, its merits and demerits – and how they might improve it. In time, they became known as the ‘Danubian School’ and, for them, the game was a worthy subject to be dissected and theorised. In his seminal book, Inverting the Pyramid: The History of Football Tactics, Jonathan Wilson put forward his belief that these educated, largely middle class, coaches in Austria and Hungary viewed the game through a different lens to the men who were shaping British football in the twenties and thirties.

“For the importance of tactics fully to be realised, the game had to be taken up by a social class that instinctively theorised and deconstructed, that was as comfortable with planning in the abstract as it was with reacting on the field and, crucially, that suffered none of the distrust of intellectualism that was to be found in Britain. That happened in central Europe between the wars.”

In Vienna during the twenties the game truly took off and the tens of thousands of fans that attended the big matches enjoyed talking about them just as much as watching them. There were specific coffee houses where supporters of each of the city’s major clubs would meet and one café in particular, The Ring, became the centre of Austrian football discourse. But despite the high-minded atmosphere that surrounded them, these coaches were not just chattering. They aimed seriously to take a wonderful game and make it better and, in the years that followed, a new, decidedly central European style of play emerged.

The ‘Danubian Whirl’ sounds like it might be served with a long spoon, alongside a hazelnut cake, but it was in fact the method of play that helped Austria to become one of the pre-eminent footballing nations of the interwar period.

Hugo Meisl, coach of the Austrian national team between 1919 and 1937, was the mind behind the side that became known as the ‘Wunderteam’, pictured below. They built their game around short, pattern-weaving passing and interchanging of positions, encouraging creativity and free-thinking among its attacking players. Up front, instead of a powerful, battering ram centre-forward, that team boasted a deep-lying, slight technician called Matthias Sindelar, whose movement and vision bamboozled opposition defenders and opened up space for his team-mates to run riot. 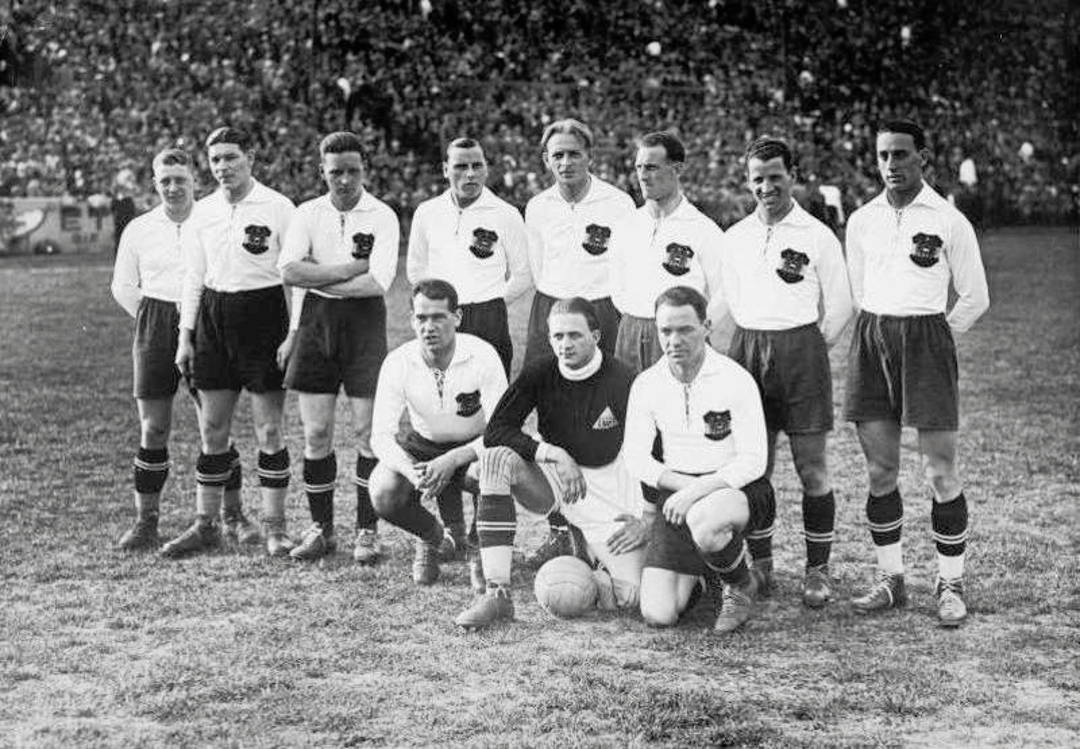 Austria, with this flamboyant system of play went unbeaten for 14 matches between 1931 and 1932, while Hungary and Czechoslovakia were making similarly great strides in the footballing hierarchy, reaching the World Cup final in 1934 and 1938 respectively (where both lost to an incredibly organised Italy side).

The very nature of the coffee house and its meandering, discursive atmosphere leant itself to their cause. In the years between the world wars, central European clubs and nations gained an advantage on the football field by dint of the decision by these coaches to sit and scrutinise football like they would any other cultural phenomenon. Among their number were many Jewish coaches, including the Hungarians Béla Guttmann and Ernő Erbstein, who later plotted together to escape a Nazi labour brigade during the Budapest Holocaust in the latter stages of the Second World War. Guttmann went to on to win the European Cup twice with Benfica, while Erbstein was the mastermind behind Italy’s greatest-ever club side, the Grande Torino (pictured below), who won Serie A five times before perishing tragically in the Superga air disaster of May 1949. 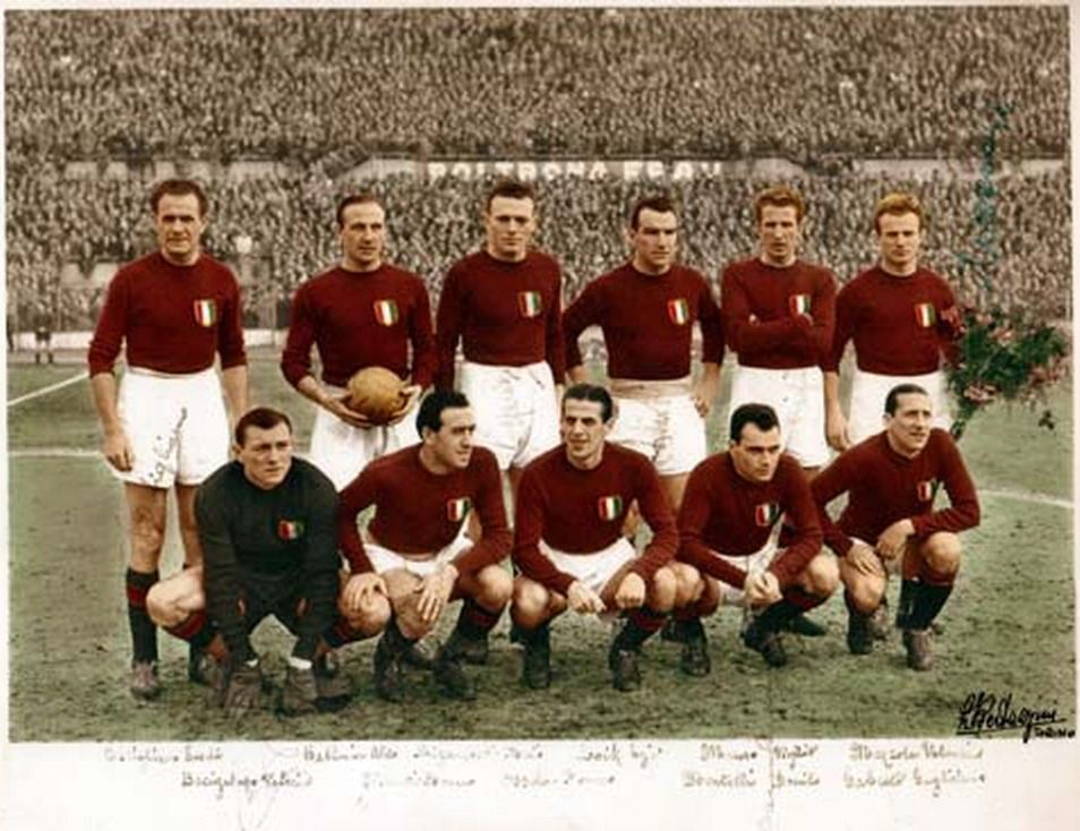 Put simply, these coaches transformed football. They looked at methods of training, physical preparation and the psychological aspect of the game with a critical eye. Nothing was taken for granted. They intellectualised the sport, and in doing so, they began a process that continues to this day; a process of constant improvement, of discussing the current wave of tactics, the best teams, and how they might be undone or improved upon. It is because of their approach to understanding football that the game continues to advance with every generation. And we have the coffee houses of Vienna, Budapest and Prague to thank for it.

Dominic Bliss is a sports journalist and author of Erbstein: The triumph and tragedy of football's forgotten pioneer. You can follow him on Twitter